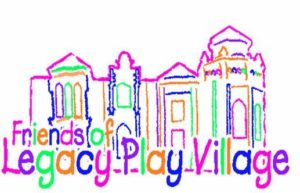 An idea was born in 1999, under the Lubbock Beautification Impact Area, to consider the possibility of a community built playground as a legacy for the community. After two years of research, Legacy Play Village, a historical play learn facility was on its way to becoming the largest playground of its kind in North America.

The Junior League of Lubbock is the founding donor of Legacy Play Village giving $150,000 in seed money toward this amazing one-of-a-kind playground. The JLL has established an endowment fund to ensure the proper long-term maintenance of the playground. We have also dedicated volunteers from the beginning research stage through the actual build.

Leathers and Associates, the architect from who helped us coordinate the building of Legacy Play Village, has built over 1600 community built playgrounds worldwide. They specialize in drawing communities together to design their own unique playground. The process begins with Design Day which was held in February 2002. Area college students visited 35 schools to interview the experts – local elementary students. The day was filled with energy and excitement as the children conveyed their ideas for their playground. That evening a community event, attended by over 500 people, launched the official unveiling of Legacy Play Village.

After 4 years of dreaming and planning, Legacy Play Village was built in October 2002. Over 10,000 volunteers braved inclement weather throughout October to build one of the nations largest community built playgrounds. Over a period of fourteen days, people of all ages and abilities participated in this old fashioned barn raising – kids sanded, captains led crews to build and rout, volunteers checked out toods and served meals. Volunteers showed up for many different reasons but amazingly enough those same volunteers continued to return day after day. Many stated that they really wanted to finish whatever they had started.

On the evening of Sunday, October 26, 2002, the sun peeked through the clouds as we opened the park for an eager group of kids and adults. We then celebrated with a meal and huge Legacy Play Village cake.

Officially the park opened on December 20, 2002. Santa made a special appearance via helicopter to cut the ribbon as we dedicated the park to our community. A dream became a reality with the help of many talented and dedicated volunteers.

Today, the playground continues to attract record crowds each day as they play and learn about the rich heritage of the South Plains.