Pop-Tarts® serve as the treat in each South Plains Food2Kids sack. The sacks may be filled with nutritious, shelf-stable food, but the Pop-Tarts® always stand out as the recipients’ favorite item. One child wrote the Junior League of Lubbock and stated that having Pop-Tarts® made them feel like a real kid just like their peers because it was an item their caregivers could not afford.

Another recipient shared that they never invited friends over on the weekends because they had no food in the house to offer their guest. But when they received their South Plains Food2Kids sack, they now had a sleeve of Pop-Tarts® to split: one for them, and one for the friend they could now invite over to play. The Pop-Tarts® became a luxury item that enabled the recipient to have what most consider a normal rite of childhood.

Pop-Tarts® are the most expensive item in each South Plains Food2Kids sack and cannot be purchased at a discount, but the item is the highlight of the sack for so many children. Pop-Tarts® are the easiest item for the public and members to donate. Something as small as a Pop-Tart® can make a life-changing impact. 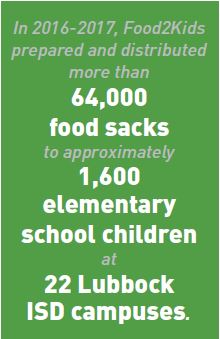